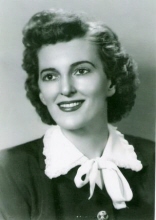 Eva Rob Adams, age 94, died peacefully at her home while surrounded by her family, Tuesday morning, July 26th, 2005. Born in Elkhart, Texas, she was the oldest daughter of Clara and Charles Watkins, an East Texas pioneer family which settled there in 1822. Mrs. Adams was the valedictorian of her Seagraves High School Class, a graduate of Texas Tech University and she also attended the University of Texas and the National University of Mexico in Mexico City. Her career spanned over four decades which included teaching in a one room schoolhouse, women's editor of the Lubbock Avalanche Journal and the Denison Herald, producer of her own radio program, public relations member of the Corp. of Engineers in Dension, Tulsa, and Dallas and she also taught English in the North East School District. To this day, her students comment about the wonderful teacher she was and how much she influenced their lives. She was a lifetime member of the Eastern Star and St. Luke's Episcopal Church; serving as president of the Green Door Thrift Shop and Women of the Church; Daughters of the King and she also served on the Wedding Guild. She was predeceased by her husband, Lt. Col. Frank W. Adams. Mrs. Adams is survived by her daughter, Clara and her husband, Tom Chumney; son, Walter Adams, sister, Kathleen Williams of Gatesville, Texas, sister in law, Anita Ruth Smith Jerrell and numerous neices and nephews. The family wishes to express their gratitude for the loving care provided by Hospice/VNA of San Antonio.Those desiring to make memorial contributions may send them to the Shrine Hospital for Children, Galveston Burn Unit, c/o Alzafar Shrine Temple, 901 N. Loop 1604 W., San Antonio, Texas 78232 or Hospice VNA, 8721 Botts. St., San Antonio, Texas 78217 or to a charity of your choice. MEMORIAL SERVICE 3 P.M. Thur. July 28th St. Luke's Episcopal Ch. 11 St. Luke's Ln. To leave a note for the family, go to meadowlawn.net and select Obituaries.