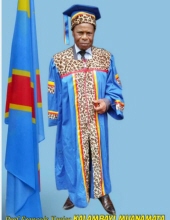 Francois Kalambayi passed away March 9, 2020 surrounded by his beloved family. He is off to the heavenly sky to be with our Lord Jesus Christ. No more suffering, no more pain. It has been a long hard road for his wife and all his children watching him decline, but he is not suffering anymore. He was born on March 27, 1946 and was one of 7 children born to the late Antoine Maboyi and Nathalie Kalanga who is still alive. Francois attended Nguema Elementary school, then received his high school diploma at St. Louis College in Kasai Central. Following High School, he traveled with his family to Kinshasa the capital city to further his education. He graduated with high distinction from IPN with a bachelor’s degree in French and African Linguistics. After being an assistant teacher for years, Francois received his PhD and became a full professor. He was married for 52 years to his sweetheart, Lucie Kabuay. Francois had a passion for electronics and enjoyed listening to classic music. Left to cherish his memory are his children Maurice, Jean Claude, Veronique and Mitterand; grandchildren Believe, Ornella, Jean Claude, Julianna, Ofranel, Ange, Michelle, Davina, Daniel, Arianna, Brianna, Daniella, Caleb, Samuel Marc Antoni, Jo Warren, and Nathanael; and a host of extended family and friends.