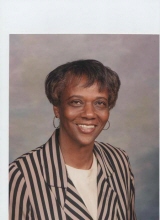 Gardenia King Busby was born Aug. 28th, 1938 in Birmingahm, Al. to Albert King Sr. and Magnolia Green King. She departed this life on December 17th, 2005. Dena's biggest love of her life were her boys and her grandchildren. Bowling was also a love of Dena's; she won numerous trophies over the years. Though Dena only completed the eleventh grade in terms of formal education, she completed the school of life with honors. Dena loved her family and helped raise her younger brothers and sisters while being a young woman herself. She always took care of those she felt responsible for. Dena was a military wife and took those responsibilities seriously along with supporting her family and helped by being a working mother also. She loved people and seemed to enjoy positions in the field of retail employment. The job Dena seemed to take the most pride in was the raising of her sons. She always made sure their clothes were clean and they were well dressed. There was never a job too far or too hard for her when it came to her boys. Dena was also known for being a great cook. She always made extra; just in case one of her sons dropped by, which was quite often. In her later years, she turned to her church; she was an active member of the Sanctuary and Mission Choirs at Antioch Baptist Church. Sunday School became another passion of Dena's and she loved listening and giving her opinions on any topic of the Bible. Dena is survived by three sons, Spurgeon Jr. and wife, Carol, Ronald and wife, Sandra and Morris and his friend Julie Bravo. She is also survived by five brothers and sisters, Bobbie Jean, Archie, Yvonne, Euphoria and Epathia. Dena is also survived by eight grandchildren and one great-grandchild along with a host of nieces, nephews and friends. Visitation is scheduled for 6PM - 8 PM Tuesday, Dec. 20th at Meadowlawn Tribute Center, 5415 E. Houston St. A Funeral Service will be held at 11 AM, Thurs. Dec. 22nd from Antioch Missionary Baptist Church, 1001 N. Walters, The Rev. Dr. E. Thurman Walker, officiating. Interment to follow at Meadowlawn Memorial Park. To leave a note for the family, go to meadowlawn.net and select Obituaries.