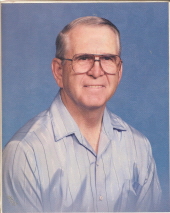 On Tuesday, February 7th, 2017 Garland Weldon Allen, age 87 of San Antonio, TX, passed away at the Baptist Medical Center surrounded by his loved ones, and with his loving wife by his side. Garland was born in Center, TX in 1929 and at the age of 18 he joined the military and proudly served his country in the Air Force where he was impressively decorated with multiple honors and medals, and was honorably discharged at the age of 31. In 1952 Garland married his first wife Joanne Saltsman, and together they raised a daughter, Janet Mary, a son Christian Garland, and went on to have four grandchildren and one great grandchild. Eventually Garland settled in San Antonio, TX where he met and married his second wife Loyce Massey in 1992, and his family expanded to include four stepdaughters, a stepson and several step grandchildren. In San Antonio Garland built a successful tire business and was a great asset to his community. Garland was a man of faith and generously gave to causes he felt were important for the good of mankind. He helped the homeless, provided jobs for the down-n-out and those who needed rehabilitation or a second chance at life. Garland enjoyed his work and enjoyed providing for his loved ones, employees and those in his community. He was 86 when he finally retired. It was only the complications from knee surgery that forced him to retire. Garland enjoyed traveling long distances to visit his siblings and friends. He enjoyed good conversations, witty jokes and lots of laughter and fellowship. He also enjoyed hot-n-spicy foods. On many occasions he and Loyce would come home with blazing heartburn (and mouths) from eating at his favorite TexMex restaurant. He loved it! After Garland was diagnosed with advanced congestive heart failure he conveyed to his family that he was at peace with the prospect of dying as he had lived a long and fulfilling life and felt very blessed and ready to go whenever his body would give out. And for the following months until his death, his spirits were high, and he continued to show loving care for his wife Loyce, his family and friends, and even checking on those in need. Garland was preceded in death by his parents Eunice & Charley Allen, his son Christian Garland Allen, his sister Bert Malaer and his brothers Hulen, Jesse and Sandy. He is survived by his loving wife Loyce, his daughter Janet Burt, son-in-law Jimmy Burt, grandchildren Meagan, Tyler, Morgan, Madison, great grandson Hank, stepson Roger, stepdaughters Delinda, Susie, Liz, Krystal, nine step grandchildren, ten nieces, nine nephews, and many great nieces and nephews, as well as great, great nieces and nephews.