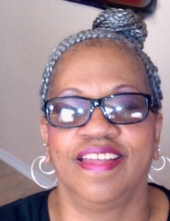 Genise Renee McLaughlin (Gordon) affectionally called “Tee” was born October 16, 1952. She died unexpectedly on October 18, 2019 of complications related to pneumonia. Tee was born in Detroit, Michigan and was the second born of three siblings. Tee’s family moved to Los Angeles, CA in 1958, where the weather was conducive for her father to work year-round in the Cement Mason industry. She attended Arlington Heights Elementary, Mount Vernon Junior High and Los Angeles high schools. In 1969, upon the separation of her parents, her mother returned to Detroit, MI with Genise and her younger brother where she graduated from Mackenzie High School in 1971. After graduating from high school, she joined the United States Air Force and was assigned duties as an Inventory Specialist at Offit Air Force Base in Nebraska and returned to Detroit after her enlistment. Upon returning home, she purchased a home for her family and received a certification through the GI Bill in Medical Transcription and worked on the staff at Grace Hospital where she was an absolute wizard on deciphering doctors scrubbed writings and accessing accurate and vital data for patient needs. Tee’s favorite pastimes were doing puzzles, watching classical movies and loved reading. She always said her greatest accomplishment in life was being a mother to her wonderful sons, Greg and Damon. Tee accepted Christ at an early age and was a member of the Eastside Church of God in Detroit, MI pastored by Bishop William L. Lane. She is survived by her mother, Dotha Mae Gordon of San Antonio, Texas; sons, Gregory McLaughlin of Detroit, Michigan and Damon McLaughlin of San Antonio, Texas; brother, Rickey Gordon (Brenda) of San Antonio, Texas; niece, Renata Cunningham (Lorenzo); nephew, Anthony Gordon-Evans of Villa Rica, GA; and a host of cousins and friends. She is preceded in death by her father, Michael Gordon and brother, Bernard Gordon. In lieu of sending flowers, please make a donation in Tee’s name to your local Pet Humane Society.