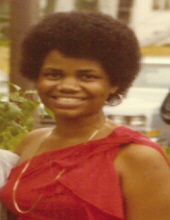 Gloria Faye Speed came into the world an anointed child of God. Born on January 1st,1940, she was known as an Angel of new beginnings for being born on New Year's Day and at the start of a new decade. Gloria was born in Schulenburg, Texas to the parents of Gussie Lee and John Wesley Speed who preceded her in death. Gloria was the youngest of six children born to Gussie and John Wesley. Gloria’s siblings, Marva Dale Cole (Herbert), George Wesley Speed (Dorothy), Danny Speed, and Joyce Elaine Thomas (Manner) all preceded Gloria in passing from life. Gussie Lee Speed is the last of Gloria's living siblings, and the closest to Gloria in age and in life. At a very young age, Gloria relocated from Schulenburg, Texas to San Antonio, Texas with her parents and siblings. Gloria graduated from Wheatley High School in 1957. She continued her studies at the University of Texas at San Antonio. Gloria met her first husband Lonnie (Tony) Ross, who was a decorated service airman with the United States Airforce. From this union came Toni Laleah Ross. Toni Gloria’s eldest child also preceded her in passing into Glory at the tender age of 42. After separating from Lonnie, Gloria decided to relocate to California with Toni in tow. This is where she met the love of her life, U.S. Marine Phillip M. Boyd. Gloria and Philip were united in matrimony soon after. Philip had two children from a previous relationship, Kevin Boyd, who preceded her in death and Antoinette Boyd. Gloria naturally embraced them as her own as Philip did with Gloria's daughter, Toni. Soon, this blended family welcomed two more children, Gay Rashaun and Tyah Amina. From her children, Gloria was blessed with a host of grandchildren and great grandchildren. From her eldest daughter Toni Ross Abadie (Ulysses), Gloria was blessed with three grandchildren, Danerro (32), London (28) and Alani (26) and four great grandchildren O’Shyn Major, (8), Zion Maliek (7), Jahlani Reine (5), and Kyra Hendrix (2). From daughter Gay Rashaun Benn (Todd) of California are grandchildren Jonathan (23), Rachel (22) and Natalie (21). From Tyah Amina Williamson (Charles) of Georgia are grandchildren Charles (Chase) (15), Naomi (12). Gloria also leaves behind the father of her children Phillip M. Boyd, and stepdaughter Antoinette Boyd, as well as Gloria’s only living sibling, Gussie Lee Speed, and a host of cousins, nieces, nephews, family members, and friends who all love and cherish the Dutchess. Gloria has always been a special and beautiful soul that the world has had the privilege to know. We are all better people for having the privilege of knowing and being an important part of Gloria's life. Gloria will be missed and cherished by all who were touched by her presence on God's earth during her assigned time with us.