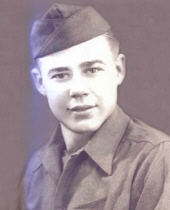 H.E.'Ed Tomerlin, age 81, passed to Glory at his home in San Antonio, Saturday, June 11, 2005. Ed was a proud Veteran of WWII, landing in Normandy and Omaha Beach five days after D Day. After the war was won in Europe, Ed volunteered to go to the Pacific and was on his way when the Japanese surrendered. After the war, Ed ventured into the trucking business contracting for Zero Motor Freight and E.A. Holder and he operated his own trucking company for 25 years as well as several other major carriers. Ed was raised in Mineral Wells, Texas and as a teenager worked at a gas station and also sold newspapers. Two of his customers turned out to be Bonnie and Clyde. Ed never met a stranger and he had friends all across the country. Survivors include his children and their spouses; William Edward and Susi Tomerlin, Jayne Marie Davis, Gary Lynn and Karin Tomerlin, Linda Jean and Ruben Garcia, Callie Lee and John Fincher, Larry Dean Tomerlin, Penny and Dan Pfeil and Russell Tomerlin. Ed is also survived by 24 grandchildren and 9 great-grandchildren. Visitation will be held from 5 - 8 P.M. Monday, June 13th at the Meadowlawn Tribute Center, 5415 E. Houston St. A Graveside Service will be held at St. Paul's Cemetery, 108 S. Main St. in Cibolo, 10:30 A.M. Tuesday, June 14th, 2005. The family wishes to give their heartfelt thanks and praises to the Vitas Hospice Staff for the loving care they gave Ed. Please sign the guestbook for the family by going to meadowlawn.net and Select Obituaries-Sign Guestbook. Arrangements by Meadowlawn Crematory and American Mortuary.