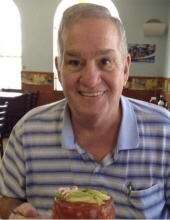 Henry George Brann, 71, passed away April 2nd at home surrounded by family in San Antonio, Texas. Henry, also lovingly known as George, was born on October 8, 1949 in Paris, France and was adopted by William T. and Margaret D. Brann. He enlisted in the U.S. Navy and proudly served on the U.S.S. Constellation when he met Catherine. They married October 13, 1972 and settled in San Antonio, Texas. George was employed as a civil servant for years at Randolph AFB until he retired. He will be missed by all who knew him and his spur of the moment humor. George made a friend everywhere he went. For years he volunteered time serving his community as a volunteer firefighter and dive team member, as well as serving as a Deputy Constable for Bexar County. He enjoyed hunting, fishing, shooting at the gun range, was a recycling enforcer, and a computer networking guru. He also loved every animal that ever crossed his path. George is survived by his beloved wife of 48 years, Catherine, children: Anthony sp. Doris, Gerald, Elizabeth sp. Javier, and Loretta; his 8 cherished grandchildren, Teresa sp. Wes, Alec, Marcus, Jadyn, Tommy, Layla, Elena and Gia; 2 great grandchildren, Kairi and Xander; and cousins, Brad sp. LaNelle and Pam sp. Adam. The family would like to thank Gilbert and Ashton for their kindness and compassion. A Memorial Service will be held at a later date.