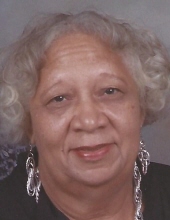 Ida Mae McGrue was born on November 30, 1930, to Jeff and Pearl Perryman, in Runge, Texas. She spent time in Karnes City and Kenedy before marrying Robert McGrue in 1948. They lived in Corpus Christi, where they had their only child, then moved to San Antonio. During their time, Robert and Ida loved to travel all over the country, particularly out west. Ida was a member of the Church of the Living God and retired from the Alamo Community College District. Ida, or “I.M.,” as she was affectionately called by some, was self-taught in playing the piano and other instruments. In fact, music is THE family affair, in that many family members are gifted musically. In total, Ida had 10 siblings, eight of whom have pre-deceased her. She was also pre-deceased by her parents and husband Robert. She passed away just one day before what would have been her 72nd wedding anniversary with her husband. Left behind to cherish Ida’s memory are her daughter, Glenda Ellison, sister, Ivy Jones, brother, Richard Perryman, her four grand-children: Steve, Wade, Michael and Carrie, and four great-grandchildren, along with many other friends and relatives. In lieu of flowers, the family requests that you make a donation to the Stockdale Residence and Rehabilitation Center, located at 300 W. Salmon St., Stockdale, Texas 78160.