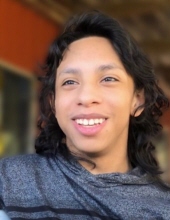 Isaiah Andrew Goynes transitioned into eternal rest on July 17, 2021 at the young age of 16. Born on April 25, 2005 in San Antonio, Texas to parents Sarahi Sanchez and Norris T. Goynes II & III. Isaiah grew up in San Antonio, Texas. He attended Oak Meadow elementary, followed by continued education through homeschooling, where he was currently serving his sophomore year of high school. Isaiah was both talented and passionate about his interests. His main passion was for his art which consisted of creating his own line of custom-made figurines, with outfits tailored specifically to their personalities. Each figurine had their own back-story and persona, and details so intricate, that each masterpiece could take upwards of 2 weeks to complete his creation. Isaiah was also an avid video gamer, accomplishing countless victories on Fortnite. Isaiah had many nature and outdoor experiences over the years that included family beach trips and state park adventures. He was admired as a pet lover as he showed much affection towards his dogs, Kennedy and Liberty. Isaiah will be greatly missed and forever be cherished for his pure soul and the humbled love he showed towards family and the people around him. He will be remembered as the “super hero” in our hearts. He was preceded in death by his maternal grandmother, Alma Velazquet, and maternal grandfather Andres Hernandez. He leaves to cherish his mother, Sarahi Sanchez, father, Norris T. Goynes II & III, his stepfather, Robert D. Sanchez, sisters: Katelynn, Nevaeh, Mila, and Noor; his paternal grandmother, Linda Goynes, paternal grandfather, Norris E. Goynes, step-grandfather, Robert Sanchez, step-grandmother, Martha Sanchez, and many other close relatives and friends. A Funeral Service will begin on Friday, July 30, 2021 at 2:00pm in Meadowlawn Funeral Home Chapel, 5611 E. Houston Street. Interment to follow in Meadowlawn Memorial Park. To leave a note for the family, please visit the The guestbook at www.meadowlawn.net