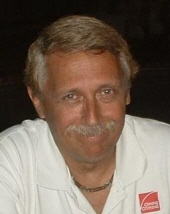 James “JimmyMac” Padrick McMullin, of Canyon Lake, born January 25, 1951, South Bend, Indiana, went sailing with his Lord on December 5, 2007. He is preceded in death by his mother, Eunice Atkins McMullin, and his brother, Charles McMullin. He is survived by his beloved daughters, Sara And Ginna McMullin, San Antonio, his father, Robert McMullin, Chicago, sister, Fran Kirschten and brother, Robert McMullin, both in Chicago, sisters Jane Ann Trier and Carol Whitworth, both in Florida, and several nephews and nieces, along with his loving fiancée, Laura Deere, Houston, and his faithful and playful dog, Easter. Jim started his career with Florshiem Shoes, like his father, and eventually began working with San Antonio Shoe(SAS), which moved him to many places, opening new stores, for many years. He later worked at KB Toys, and, eventually got into working at Owens Corning, for several years. He was known as for coming to work dressed ready for the lake, or heading out to his daughter’s soccer games. He also had a radio with earphones, for the times he had to be somewhere else, so he would not miss a Spurs or Ranger football game. Jim was a major soccer dad, and was known by all on the sidelines for his “cowbell”, that he would ring for every goal scored, or, as we know, to intimidate the opposing team. He loved watching his girls play, and attended almost every game. The only games he missed were the ones that “conflicted” with the Smithson Valley Ranger Football finals, but his “girls” were forgiving. When his girls were out of high school, Jim continued his love of watching the Rangers Football games, and was happy sitting in the stands with the parents and fans cheering the team on. He made many friends while sitting in the crowd. When his daughters weren’t playing, and football was over, he would be at his favorite place, on Canyon Lake, sailing with his lifelong friend “Captain” Bob McCaffrey, “Admiral” Kristen McCaffrey, his love, Laura Deere, and, of course, Easter. Jim also loved to fish, hunt, and white water sports. He had little time to enjoy these hobbies, but would jump at the chance if possible. Jim made a friend anywhere he went, and even though he knew their name, he would address the men as “buddy” when he would see them at a later time, earning him the nickname of “McBuddy” by many. Jim was always a “laid back” person, and never hesitated to help a friend. Jim had a positive attitude on life, and wanted to be there for others. He was involved in events that helped others, even when his health was faltering, and always had a smile for everyone. Jim will be greatly missed by all that knew and loved him. It was too soon for his passing, and his memory will be kept dear by his daughters and loved ones. To Jim, we wish you “Fair winds and calm waters” for your eternal life, and try to keep Monty in line. The family would like to invite his friends and co-workers to a memorial to celebrate his life, and share memories, on Monday, December 17, 2007, at PaPa Docks Restaurant, at Canyon Lake Marina, FM 306, at 3p.m. to 6p.m. The family requests that in lieu of flowers, donations be made to the Transplant Unit at University Hospital, San Antonio, in his memory. Please visit his Guest Book at www.Meadowlawn.net , where messages for his family can be made. His daughters can be reached at 830-980-2312, or, 115 Mountain Echo, San Antonio, TX 78260. The family wishes to thank the doctors and nurses at McKenna Hospital, and University Hospital, who helped Jim and us through his difficult journey, and all his friends and co-workers at Owens Corning for their help. It is much appreciated. God Bless you.