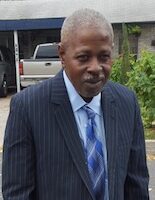 James was known for his love of listening to the radio. He also enjoyed scratch offs as well as often visiting Goodwill and various Pawn Shops. James left an impression on everyone he met. He was very giving, considerate, and thoughtful. James touched a lot of hearts and was quick to lend a helping hand.

James leaves behind a legacy that will not soon be forgotten. He will be missed dearly by all that had the pleasure of knowing him.