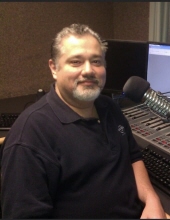 James S. Villa, 59, passed away December 10, 2021. He was born December 6, 1962 to Ruben and Olga Villa in San Antonio, Texas. James loved music. He became a radio DJ for KONO radio and had the greatest radio voice. He also worked as a news anchor for KTSA. James was also the king of dad jokes. He had a good sense of humor, witty and intelligent. James will be dearly missed by all whose lives he touched. He is preceded in death by his parents. Left to cherish his memory is his daughter, Jenae Villa; siblings, Ruben Villa, Victor Villa, Michael Villa and Joan Edwards; grandchildren, Jaxx and Ace Cruz; numerous nieces, nephews and extended family and friends.