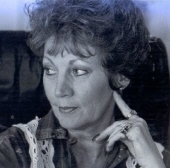 Janet Elaine Ingber passed away to be with our Lord on April 29, 2005. Janet was born January 5, 1941 and was a lifelong resident of San Antonio. She was a graduate of Northeast High School and was preceded in death by her husband, Richard Ingber and her parents, Joe and Lorraine Ackerman. Ms. Ingber is survived by her sons, Rex Keating, Richard Keating and Charles Ingber; daughter-in-laws, Tisha Keating, Jaime Keating and Melissa Ingber; brother, Joe Ray Ackerman; sister, Ida Marie Ackerman; grandchildren, Michael Keating, Ryan Keating and Rayce Keating; and long time friend and companion, Tommy Carlock all of San Antonio. In lieu of flowers, donations may be made to the American Cancer Society, 8115 Datapoint Dr., San Antonio, TX 78229.