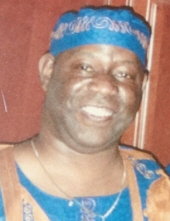 Jerry Joe Shirley went to be with the Lord on September 29, 2019. He was born in San Antonio, Texas on September 7, 1948 to the late Ella Mae Wright. He was an only child that was raised by a special father, William Franklin Wright who also preceded him in death. In 1966, he married the late Dorothy Shirley, and to this union three daughters were born. Arline Thompson (“Uncle Buck”) his beloved uncle, also preceded him in death. Jerry Joe was educated in San Antonio by the public-school systems. He was an intelligent man that enjoyed sharing his knowledge amongst family and friends. Throughout the years, he was employed at various hospitals in San Antonio where he worked as a cook. Later in life, he relocated to Austin, Texas and continued working in the school system. While living in Austin, he met and married Barbara Shirley. He enjoyed living in Austin, where he met and engaged many friends and relatives. However, upon learning of his mother’s illness, he relocated back to San Antonio to assist with her health care needs. Jerry Joe was a free spirit and enjoyed living life to the fullest. He had multiple past times that included gatherings with friends and family, fishing with his mother, watching sporting events, and proudly wearing the crown of the domino king. He was well known here in the city of San Antonio, where he leaves a legacy of friends. Jerry Joe was also quite spiritual and enjoyed discussions about the goodness of the Lord! He accepted Christ and was baptized at an early age. Later in life while living in Austin, Texas, he rededicated his life to Christ and was baptized at Westover Hills Church of Christ in November of 2005. He continued church attendances, upon transitioning back to San Antonio, Texas. Jerry Joe will be deeply missed by his family and friends. He leaves to cherish his memory his beloved daughters; Tina Arnold (Alvin), Tammy Jenkins (Milo), and Tosha Shirley. Grandchildren; Marvin Shirley, Maurice Shirley (Ebony), Mitranique Shirley, Shartez Shirley, Sershun Shirley, and Shustin Shirley. Barbara Shirley; First Cousins; Ella Lorraine Thompson, Robin Thompson-Monroe, and Bruce Brown. Cousins; Willie Thompson, Melody Thompson, Gloria Clark, and Ricky Cotton. Best friends; Jimmy Grant & James Watkins (Bubba), great grandchildren, and a host of family, and close friends.