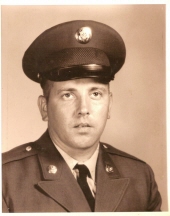 Jerry Robert Brown was born on a snowy day, November 28, 1941 in Mesquite, Texas. He went to be with our Lord on August 9, 2018 at the age of 76. He was the 2nd child of Georgia and Robert Brown. Jerry grew up in Dallas, Texas and moved to San Antonio, Texas in 2005. He attended Crozier Tech High School in downtown Dallas. Jerry went to Vietnam in the fall of 1967. He sustained a very serious disabling injury during the war and received an honorable discharge in 1969. He was the recipient of many medals, including the Purple Heart. Jerry loved cars and was a very good pool player. He had many friends and family and was loved by all. Jerry is preceded in death by his parents, Robert Brown and Georgia Adams; sister, Helen Potter; brothers, Kenneth and Tommy Brown. He is survived by his wife, Carla Brown; sons, Rob Brown, Jeff Brown and his wife Leslie. Jody Brown and his wife Linda; grandchildren: Tiffany and Kendall Brown, Delaney Brown Kreutz and her husband Nathan, Shannon Williams and her husband Eliseo; great grandchildren: London, Brooklyn and Braylon Barree, Azriel and Rowen Williams; brother, Doyle Brown; sisters, Betty Laquey and Susan Adams along with many nephews, nieces and cousins. He will be missed by many.