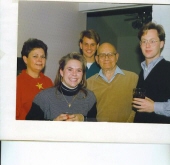 Jesse O. ( J.O.) Yeargan, age 88, passed away October 16th, 2004 in San Antonio, Texas. Born in Dallas, Tx., J.O. was the son of Jesse and Nan Yeargan. J.O. had been in San Antonio since 1953 and he spent most of his life as a salesman. He was pre-deceased by his wife Wanda Neal Yeargan and his brothers, Billy and Harold Yeargan. J.O. is survived by two children and their spouses; son, Randy Yeargan and his wife, Vicky, of Duncanville, Tx. and his daughter, Wanda Cecil Krezdorn and her husband Jack of Bulverde, TX. His grandchildren include; James Cecil of New York City, NY., Kara Cecil of San Antonio, Tx., Dennis Cecil of Austin, Tx., Lisa Hendricks and her husband Ryan from Midlothian, TX., Catherine Yeargan from Galveston, TX., and Michael Yeargan from Sacramento, CA. One great grandson also survives; Zachary Hendricks. A Memorial Service will be held at 3:00 P.M., Wednesday, October 20, 2004 at Coker United Methodist Church. In lieu of flowers, please send memorials to the American Cancer Society, 8115 Datapoint, San Antonio, TX. 78229, or the American Lung Association, 7475 Callaghan Rd. San Antonio, Tx. 78229 or to a charity of your choice.