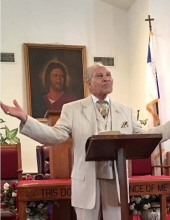 Deacon Jesse Turner was born February 1, 1938 in Seguin Texas. He was the oldest son born to the union of Elder Knolle and Mother Rosia Turner who preceded him in death. Deacon Jesse Turner accepted Christ as his Lord and Savior and never failed to witness and testify of God's goodness. He along with his wife, Missionary Nancy Turner, children and grandchildren were faithful members of the Antioch Church of Our Lord Jesus Christ in San Marcos, Texas. Not long after high school, Deacon Turner served his country by enlisting in the US Army and became a marksman. He later met and married his Nan (Missionary Nancy Turner) also known as his 'little woman'. He prided himself on taking care of his family. He was a great husband, a great father and a great friend to those who knew him. He was a man known for telling it like it is and never sugar coated anything. He was a people person and loved to talk. Deacon Turner wore many hats and was gifted with many talents. He owned and operated Astro Construction company and JNT Construction company. Produced movies through his production company; Jess Turner Productions and hosted his own talk show, Jess Turner Talk Show which is and will continue to air on Spectrum TV. He founded the Elite Golf Association and successfully made it possible for over 176 individuals to travel to Hawaii twice. He founded Elite Youth Services and taught at risk youth the game of golf through free golf lessons. His slogan 'We may never have a drug free city, but we can work on having drug free kids' However, the highlight of his life began when he accepted Jesus as his Lord and Savior. Deacon Jesse Turner served faithfully and tirelessly before the Lord. Everywhere he went whether it was at Costco, HEB, Red Lobster, Longhorn Steakhouse or within his neighborhood, Deacon Turner shared his testimony and warned people to get right because you don't want to end up on the dark/black side (Hell). He often would say 'Lord, help us to serve you the right way' and 'Don't let us die and go to hell'. Deacon Jesse Turner was passionate about his walk with God and it reflected through the life he lived. Deacon Jesse Turner is survived by his loving wife of 57 years, Missionary Nancy Turner. Five children, Nancy (Billie) Evans, Laraine (Rain) Turner, Jesse (Boy) Turner, Jr., Rosia (Calo) Turner and Marie Nina (DeDe) Manwill (husband, David Manwill). Three Aunts, Ethel Luckey, Dorothy Luckey and Geraldine Stewart. Five siblings, Knolle Turner, Jr. (Brother), Wilma Turner, Lillie Turner, Lelia Holmes (husband, Jimmy Holmes) and Vivian Adams (husband, Charles Adams). Nine grandchildren, DeWayne (Gator) Satchell, Jr., Derek (Bear) Mason, Jr., Gibreel (Boy Wolf) Evans, Laraine (Dedar) Turner, II, Xa'Kia (Kia) Evans, Christopher Bridges, Deondre Turner, Jesse Turner III and Kentaro Turner. A host of cousins, nephews, nieces and great grandchildren.