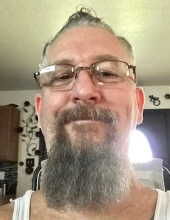 Jimmy Wayne Peters April 1, 1968 – February 5, 2021 Our beloved husband, father, son and friend gained his heavenly wings on February 5 , 2021 at the young age of 52. He was born in Van Buren, Arkansas to parents Jimmy Don and RuthAnn Peters on April 1, 1968. Jimmy was raised as a Christian in Catcher Freewill Baptist Church and remained devoted to Christ until the end. He graduated early in 1986 from Van Buren High School. While working at the local bank, with his father keeping the grounds, feeding animals he still managed to maintaining good grades. In August 1987, Jimmy proudly joined the United States Army Reserve. He worked as a civilian contractor for several years for the US Army while serving in the Reserve until being called on active duty where he served the rest of his career. He retired at the rank of 1SG after almost 28 years of service. His last duty station was at Ft Hood, Killeen TX, where he served as the III Corp Commandant/Building Manager. He mentored thousands of soldiers at home and abroad. He met the love of his life, his wife Sharee, on July 17, 2011 on her first day at work. The two shared a beautiful union of almost 10 years. Jimmy was an animal lover, especially dogs. He enjoyed spending time with his wife, his parents, his children and his dogs. Jimmy had a heart of gold and was always willing to help anyone in need. He will be deeply missed and forever remembered as a phenomenal leader, mentor, protector and an overall beautiful person who touched the lives of many. He is preceded in death by his father. He is survived by his mother; Mrs RuthAnn Peters, his beloved wife; Sharee Peters, his children; Ashley N. Peters, April M. Peters, Taylor A. Peters, Shianne A. Peters and Stetson L. Peters, sibling; John E. Peters, and numerous grandchildren, close relatives and friends.