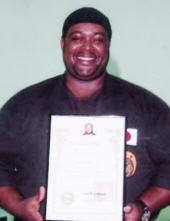 John Catraill Watts was born September 08, 1959 to Gertie “B” and Walter W. Watts, Sr. He spent his early educational years in Tampa, Florida and graduated from Wheatley High School in San Antonio, TX. He was affectionately known to all as “Dooley”. After high school, he attended college on Oklahoma where he played football. Upon his return, he started at Jones Bar-B-Que doing what he loved, cooking. He also attended St. Philip’s College where Dooley was well known and respected for his culinary skills and expertise. He was a devoted Muslim of faith and willing to share and impart his knowledge to everyone. John was always willing to lend a hand. He was very active in his community. He was a loving father to his sons, Andre and Spencer. He also played the role of father and caregiver to many others. His nieces and nephews meant the world to him. He loved cooking, guns, and fishing. His main desire was to keep his family whole. He touched and blessed many lives, never seeking anything in return. John Watts was a great giver with a humble spirit. He will be greatly missed. He is preceded in death by his loving parents, Gertie “B” Watts and Wesley Watts Sr.; and son, Eric McMurray. Left to cherish his memory are his sons, Andre Catraill Watts and his mother, Andrea Freeland, and Spencer Artrell Burford-Watts and his mother, Barretta Burford; siblings, Velma (Pete) Williams, Dorie Henderson, Cynthia Watts, Ronald Bell, and Wesley Watts; nieces, nephews, and a host of extended family and friends.