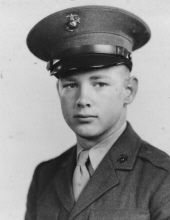 John Francis Loyd June 16, 1925 – April 5, 2020 John Francis Loyd passed away peacefully on Palm Sunday, April 5th, age 94. He was born in San Antonio to Alexander Cicero Loyd, Jr. and Ethel Elwood Loyd. Early years were spent on a small farm in the Edgewood area, home to his pet pig Buff-Buff, a pet rooster {until his Aunt Ruby cooked it) and a couple of ponies. His brother Paul and sisters Ethel and Annie had a merry-go-round and a Ferris wheel among other entertainments built by his engineer father. He graduated from Jefferson High School in 1942 and began college at Texas A&M. After his first two years, he joined the Marine Corps. Under the formidable Sgt. Masco, his basic training at Parris Island prepared him for Operation Olympic, the invasion of Japan; fortunately, the war ended just before he shipped out. The Marines sent him to Georgia Tech in Atlanta to complete his Bachelor’s and Master’s degrees in Electrical Engineering. There he met his future “war bride” Annette Emerson on a blind date. That first date was so promising, he sent a telegram to her at Wesleyan College in Macon asking her to save New Year’s Eve for him, signed simply, ‘John’. She read it to her classmates, thought it sweet, then asked, “Who’s John?” They were married six months later and enjoyed sixty years together until her passing in 2006. Their first son, Johnny, was born in Atlanta, their second, Jimmy, in San Antonio after he returned to join his father’s electrical contracting firm. He grew the company into a substantial enterprise, specializing in heavy electrical installations for industry, airports and highways. When the Texas Department of Transportation specified high mast towers topped with light rings, it was up to him to design not only the installation, but a means of changing the bulbs over a hundred feet in the air. He sold his company to his good friend L. C. Tubb of MICA Corporation in Fort Worth, but continued to work, even after he “retired” to his ranch in Kerrville. There he raised the longhorns Calvin and Hobbes, Baby, the bottle-fed orphaned fawn, ten Dalmatians, three cats, Herefords, piglets, chickens, Barbados sheep and several species of exotic deer and antelope. A lifelong hunter, he made several safaris to Africa, returning with numerous trophies including a massive Cape Buffalo, nearly a Boone and Crockett record. He was a founding member of the Town Club, a member of the San Antonio Country Club and of several professional organizations, a Professional Engineer and a Master Electrician. In his spare time, he served eight terms on the Alamo Heights City Council, was instrumental in Alamo Heights United Methodist Church’s relocation, and coached more than his share of Little League. Fortunate to have outlived almost all his contemporaries in the Greatest Generation as well as his siblings, his loving wife and his delightful companion Bobbie Heller, he is survived by his son John, Jr. and wife Virginia and their children Patrick Harkins, Chaney Hagemann (Dan), Kaly Erwin (Rick) and Liza Ruether (David); his son James Emerson Loyd and wife Susan and their children Elizabeth Burdette (Britton), Jay Loyd (Margaret Parham), Amanda Bezner (Robert) and Andrew Himoff (Ann); great-grandchildren Parker and Chloe Hagemann, Annie and John Erwin, Ada Burdette, Rivers Loyd, Ollie Ruether, Ethan and Jocelyn Bezner, and Wells, Betsy and Lainie Himoff. He was a fine man, the epitome of a gentleman and a patriot. A wonderful father, he was the greatest of role models, not only for his sons. He will be missed. No memorial service will be held at this time. Since he was such an animal lover, even of those he shot at so enthusiastically, please consider donating in his name to Wildlife Rescue and Rehabilitation, Inc.: wildlife-rescue.org or Heifer International: heifer.org.