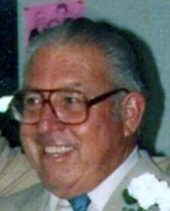 John Roy Culbertson, 79, passed away on Wednesday afternoon in San Antonio. A longtime resident of Del Rio, Roy was born Oct 13, 1928 in Houston to Charles Paul and Mary Jane Culbertson. While living in Uvalde, he met Katherine Boykin and they were married on Feb 5, 1955. After working for the International Boundary and Water Commission for many years, Roy saw the need for a pump business in Del Rio. In 1968, Roy and Katherine started Culbertson Pump and Well Service. From the 1970's through most of the 1990's, Roy worked all over Mexico and West Texas installing pumps, windmills, irrigation equipment, generating plants and water systems. Due to health problems, he was forced to slow down the last few years but still remained active in the business. Preceeded in death by his parents and brother, Clayton, Roy is survived by his loving wife of 53 years, Katherine, of Del Rio; son Gay Roy Culbertson of College Station, daughter Erin Kay Seal(James T.) of San Antonio; brother Thomas Marion of Rolla, Missouri and grandchildren: Cassie Colleen Campbell of College Station, Cpl. Clayton Trevor Whitney, USMC currently deployed to the Middle East, Ashley Amanda Whitney of Austin, , Clint Garrett Seal of San Antonio and one great-grandson, Riley Campbell of Rio Vista, TX. Roy was a devoted father and grandfather, loving husband, a successful businessman and a great friend to many. He will be missed by all who knew and loved him. A memorial service will be held at 2 PM, Saturday, January 19, 2008 at the First Baptist Church Chapel in Del Rio. To leave a note for the family, go to meadowlawn.net and select Obituaries.