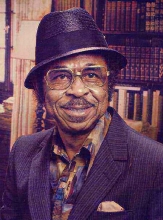 John was born on December 12, 1929 to the parentage of John Tolbert, Sr., and Rosetta Wicks Tolbert. At an early age, John confessed his love for Christ attending New Light Baptist Church, under the pastorship of the late Dr. P.S. Wilkerson. In the year 2000, December 31st of our Lord, John was baptized and joined Shiloh Missionary Baptist Church under the leadership of Pastor Andrew Wilson, where he served until his health started failing. John attended Cuney Elementary, Douglass Junior High and Wheatley High School. In 1951, John worked one year at Classified Parking, before joining the U.S. Air Force. John worked as a medic, then as a supply sergeant where he most enjoyed being and spoke highly of. He was very proud to wear the Air Force uniform. When he departed from the Air Force, John went into business for himself as a landlord, plumber, electician, etc. John was always willing to lend a hand whenever he could help anyone. John was known to always have a smile and a hardy handshake for all he met. He was better known as "Johnny Be Good" because of his demeanor. John was called form labor to reward on Sunday, February 17, 2008 at 11:40P.M. John was preceded in death by his parents, wife, two sisters and a grandson. He leaves to moun and cherish his memory a devoted daughter, Patricia(James); son, John (Betty); brother, Joseph(Ollie Ray); three grandchildren, Tamara, Corey, Djahna; companion and friend, Helen Brooks; special friend, Margaret Washington, and a host of nieces, nephews, cousins, and other relatives and friends.