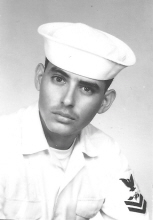 On September 7, 2018, Jose Fuentes, Jr. of San Antonio, TX, joined the kingdom of our Heavenly Father at the age of 75. He was born on July 13, 1943 in Converse, TX to Jose Fuentes, Sr. and his wife, Herlinda. He graduated from Edison High School, where he was Head Photographer, in 1961. After graduating from high school, he joined the U.S. Navy. He was a Vietnam veteran, having served on the USS Midway in the South China Sea. His specialty was in radio communications and electronics. He attained a rank of Petty Officer 2nd Class, and received numerous awards and medals. After his service, he returned home to acquire his higher education. He attended San Antonio College, where he was President of Los Pasandos, and The University of Texas in Austin. He worked for several insurance companies as a Claims Adjustor, and then eventually as a Claims Supervisor and Claims Manager. During his career, he was President of the Blue Goose Association. After retirement, he joined the Northeast Senior Center, where he volunteered teaching Spanish and English classes. Mr. Fuentes was a man of many talents. He enjoyed photography, automobile repair, dancing, listening to music, reading about history, and telling jokes and stories. He is survived by his wife of almost 50 years, Diana Beeton Fuentes; daughters, Stephanie Taylor (Jason) and Marcie Thomas (Philip); granddaughters, Alyssa and Kailey Taylor, Lily and Emma Thomas; sisters, Yolanda Marquart and Lupe Gifford (Vance); brother, Edward Fuentes; beloved friends, Larry and Connie Moralez, and numerous extended family. He was preceded in death by his parents Jose Fuentes, Sr. and Herlinda, and sister, Dora. Visitation will be held Tuesday, September 11, 2018 from 1-2 p.m., with services immediately following at 2 p.m. at Meadowlawn Funeral Home, 5611 E. Houston St., San Antonio, TX.