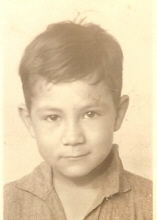 Mike resided in San Antonio for 51 years. Dad was a Rancher at the 900 Ranch at 281 and 1604 in San Antonio for most part of his life. I remember a time when we did a cattle round-up. From Redland Rd to 281. Dad and Juan where on horseback mom (Antonia) was driving the ranch truck and us girls me (Sally)Marta, and Mini (Minerva) where in the back bed of the truck with a bucket of feed shaking the can hard and yelling at the cattle to follow us down 1604 to 281, I remember people honking and waving at us doing this. Another time I was on the school bus going home I heard the kids start yelling and waving. I'm looking to see what's going on and I see my Dad on horseback checking fence line. The bus driver looks at me and smile he knew it was my Dad. But Dad just wasn't checking fence he was checking the cattle for cut and tape worms. When the cattle got to the 900 Ranch Dad would yell kickem and countem Dad was also a volunteer fire fighter for Hollywood Park while at the 900 Ranch. Dad was also know for his Bar-B Que, when we had parties dad was at the bar-b-que pit. When we had 4-H Christmas parties some of the kids would come up to dad and ask, Mr, Caseres are you going to bring your bar-b-que chicken. And a Caseres party wasn't a Caseres party without his famous bar-b-que goat. Dad also love working with his children in 4-H. If someone needed help Dad was there. Dad was rise by his Tio Joe Caseres for must part of his early live when Dad and Tia Giga Mother past away, his kids knew Dad by Tio Mike not Primo Mike. We want to thank this kids Jesse (Poncho) Steve, Maggie and Josie for being there with us on Thursday with the rest of the family. Dad also volunteer at the Garden Dale Community Center on Tuesday and Thursday for some time to help with the Food Bank to give out Bread and Sweets to the community. Dad will be miss by his children's and families and his friends. Dad would always say, I guess I see you tomorrow then. Dad is survived by his son Juan and son Brannon Caseres who resides in Spring Branch, Texas; daughters, Sally Caseres Galvan Husband Tony Jr. and Tony III who live in San Antonio; their daughter, Virginia and her husband Casey with son Chase Schultz. Chase is the Great Grandson who lives in Floresville, Texas. Marta Caseres Cotton with her youngest son Spencer who is in Stafford, Texas; their mother, Antonia Caseres who resides with Marta in Stafford; Marta's oldest son Justin now is in San Antonio. The youngest daughter Minerva (Mini) Caseres Brandon who is currently living in Tempe, Arizona with her husband Marcus. Not that she remembers, but remember being told by many family members that when she was a infant, Dad would have her in the "front" of the bed of the ranch truck, in her basinet, while he was out on his daily feeding for the cattle on the 900 Ranch. Dad's sister, Frances Espino, who lives in La Coste, Texas. His brother Refugio (Hugo) and wife Cynthia Caseres and their son Phillip Sr. and wife Libbie and children Ashlee and Phillip Jr; their daughter Diana Vasquez her husband Steve and son Nicholas all live in San Antonio. Sister Nica McLendon resides in Delta Co. Sister Jackie (Chubby) and son James Caseres resides in Ingram, Texas. Brother Tony Caseres and wife Nancy son Stephen and his wife Tiffany Caseres, Tony's daughter Regina. Resides in Kerrville, Texas. Sister Erlinda Caseres lives in Charleston, SC; youngest sister Teri Caseres Readel and husband Russ from Exeter, NH Dad was preceded in death by his daughter-in-law, Allison Caseres 1960-2001. Juan's wife; granddaughter, Adrianne Caseres 1985-1988; Juan's daughter. Brother-in-law, Roberto Espino and nephew, Timothy Gene Wickenhoefer 1981-1999- he is the son of Erlinda and Timothy Grover Wckenhoefer and brother-in-law, Hayes McClendon.