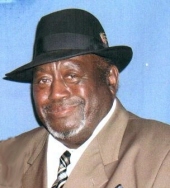 Joseph Mills was born in Sweet Home, Texas on October 20, 1935. He was the only child born to the late Ms. Clarice (Sugar) Walker. He was raised by his grandparents Mr. Woodly and Lottie Walker, who have preceded him in death. He departed this life on Wednesday, April 23, 2008. He accepted Christ at an early age at Sweet Home Baptist Church. Later he move to San Antonio, Texas where he met his first wife and from this union three children were born. He was a well know diesel mechanic and truck driver which enabled him to travel during his career. Most of all he was known for his cooking skills. He united with Antioch Missionary Baptist Church under the leadership of Pastor J.J. Rector Sr. Joseph acknowledged his faith and believed in the power of prayer. He leaves to cherish his memories, his wife Linda Caldwell; his sons, Blake Mills (Stephanie) and Sam Mills (Dawn); his daughter, Stephanie Carter (Allen); three step-children, Donovan Caldwell, William Caldwell, and Krystal Richard; 14 grandchildren, 2 great grandchildren; a host of family and friends.