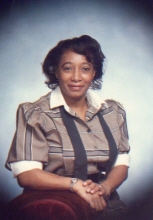 Josephine was born in Huntsville, Alabama to Mattie Sue Jones. She was first married to William Madkins and subsequently married to Alfred R. Flowers. She has 6 children, 4 boys and 2 girls. While living in Adkins, TX., she was a member of Hebron Baptist Church. Upon moving to San Antonio, she became a member of Tried Stone Baptist Church. She loved the Lord, her children, her church and taking care of people. Josephine graduated from St. Philips College with her LVN license. She instilled hard working ethics and a love for Christ in her children and grandchildren and was one to always keep those around her laughing while in her presence. Josephine was preceded in death by her sister, Mattie Pearl Morris; two brothers, Edward Jones (Sonny) and George Jones.; and her son, Willie Madkins. She is survived by 3 sons, Darryl Wayne Flowers, Frank Madkins, and William Madkins; 2 daughters, Bobbie Jean Simlin and Jo Ann Culberson; and 3 grandchildren, Breezie Beechum-Simlin, Marcus Broadnax, and Jayme Simlin.