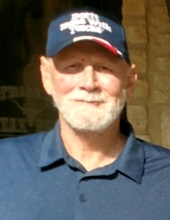 Karl Von Heilig AKA Karl with a K Karl Von Heilig was born at Santa Rosa Hospital in San Antonio, Texas on April 6th, 1957. Karl was the youngest of the six children born to Charles and Minnie Heilig of San Antonio. He had 3 older brothers, and 2 older sisters, but he was absolutely the last person who ever wanted to take orders from anyone (everyone who knew Karl, knew this). In January 1976, Karl did what his father and brothers had done before him and joined the military. He chose to serve in the United States Air Force as a Nondestructive Inspections Craftsman. Later in his military carrier, he also worked as a Structural Craftsman and a Security Journeyman while serving his Country. Karl was in the military for 20 ½ years and in that time, he traveled all around the world, and made friends wherever he would go. Up until his last breath, Karl was still in touch with serval of his close friends. When you met Karl, you met a friend for life. While stationed in Landstuhl, Germany, Karl suffered from a tragic accident. On August 28th, 1988, Karl was at the annual Ramstein Air Show enjoying a cold beer, beautiful weather, and an awesome air show. He decided to climb on top of a dumpster to get away from the crowd and get a better view of the air show when suddenly, two of the airplanes crashed and fell into a large crowd of spectators. Karl jumped behind the dumpster as soon as the planes crashed, which is what ultimately saved his life that day. He suffered from 3rd degree burns on the top half of his body and his head, and was in the hospital for three weeks before he could return home to finish his recovery. In May 1996, Karl retired from the Air Force as a Master Sergeant with many awards, honors, and ribbons. He was stationed at Shepard Air Force Base in Wichita Falls, Texas where he and his wife Kimberly lived at the time of his retirement. After the military, Karl went into the modular homes business to start his new civilian career. He started as a Manager in the Final Finish Department at Fleetwood Homes in Wichita Falls. After a few moves due to job relocation, Karl and Kim eventually landed in New Braunfels, Texas where he was a Quality Inspections Manger (South Region) for Palm Harbor Homes. This is where he and his associate, Buddy (his chihuahua), would travel around Texas to clients’ homes and fix any problems they had with their new manufactured homes. Karl took much pride in his work and loved that he could take his ‘Buddy’ along for the ride (I mean, let’s be honest, it’s pretty cool that he got to take his dog to work every day). In July 2021, Karl and Kim moved one last time to their forever home. Karl took so much pride and renovated the home that he and Kim would enjoy for the rest of their lives. They wanted a house where they could sit on the back porch, drink their coffee, and enjoy their little bit of oasis with their puppies. Karl wanted him and Kim to live a simple life and enjoy the little things. On September 16th, 2021, Karl passed away peacefully in his sleep and went home to be with his Lord and Savior Jesus Christ. Karl was proud Christian his whole life and always said to trust in the Lord in everything you do. Although he has left many of us with holes in our hearts, Karl was ready to go home. He said that he has lived a great life and when God was ready to call him home, he was ready. Karl was greeted by his parents, brother, close friends, and all his puppies that he has lost along the way (they are not dogs, they are forever puppies in Karl’s eyes). Karl is survived by his beautiful wife of 25 years Kimberly and their two puppies Buddy and Tink. His daughters and their spouses: Heather and Justin Helin of Altus, Oklahoma, Kasie and Bobby Conger of Terrell, Texas, and Holly Heilig and Rodney Poe of Aubrey, Texas. His siblings and their spouses: Charles Joseph and Dana Heilig, Janet and Max Williams, Ed Heilig, and Judy and David Ramirez. His 6 grandchildren, 3 grand dogs, along with several nieces, nephews, cousins and friends who he loved and cherished. Karl is preceded in death by his parents, Charles A and Minnie Heilig, his brother Rudolph Heilig, and his grandparents C. Joseph and Maude Heilig & Rudolph and Nellie Oppermann. Karl was the most lovable asshole you will ever meet. He loved to challenge people to piss them off, then turn around buy them a drink and give them the shirt off his back. He always had everyone’s best interest at heart, he just didn’t always know the right way to display it. Anybody who needed anything knew that they could depend on Karl to be there and help them in any way he could, and he would always pull through. He was a great husband, father, brother, uncle, and cousin as well as a great friend. We could go on to write about all the memories and stories that we had of Karl, but it would turn in a 1000+ page book (he lived life to the fullest of course), and as he would say he just wants the Reader’s Digest version of the story. If it were up to Karl, he would want his obituary to read “I am a grumpy old man. I am allergic to stupidity. I live in Texas. I break out in sarcasm. I protect my family and I love my country. If this offends you, I don’t give a shit. Biden sucks, TRUMP 2024 and he WON 2020.” Rest in peace Master Sergeant Karl Von Heilig. Your spirit will live on through all the lives that you have touched.