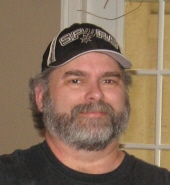 Kenneth William Gobar III, known by all as Kenny, was born December 15, 1958 in San Antonio, Texas. He passed away on Friday, August 12, 2016 after a 3 month battle with cancer. He is preceded in death by his father, Kenneth W. Gobar, Jr. Kenny is survived by his loving mother, Joan Friesenhahn of Converse. His two sisters, Lisa Joan Gardner of Hutto and Danna Lynn Link of Round Rock and her husband Rick, two sons Dan'l Linehan of Seattle, WA and Kenneth W. Gobar IV of Katy and his wife Patricia Gobar, two nephews Samuel A. Gallardo and Aaron Dean Link and one niece Erica Lynn Link. He had many precious aunts, uncles and cousins. Kenny is best remembered for his musical talents and his ability to fix and create electronics. He enjoyed gaming, camping, fishing, motorcycles and trips to Las Vegas, the Cowboys and the Spurs! Kenny had many longtime friends and coworkers whose lives were touched by him in a special way. He will be greatly missed.