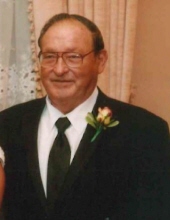 Larry Robert Albury Born: April 21, 1943 Deceased: February 1, 2020 Larry Robert Albury passed away in the comfort of his home on Saturday, February 1st surrounded by the love of his family. After fighting heart disease for the last few years, GOD called him home. Larry is proceeded in death by his parents, Mary and Jason Albury, brother Ronnie, daughter Elizabeth, first wife: Elizabeth A. Ebrom and second wife: Joyce Currnett. He is survived by his children, Wanda, Yvonne, Lorna, Michael and Richard, son in-laws, daughter in-laws, numerous grandchildren and great grandchildren. Born in Nassau, Bahamas, Larry enjoyed the island life and became an accomplished scuba diver. He also lived part of his life in West Palm Beach, Florida. At the age of 19 he left to California to weld on an underwater oil rig. While on his journey he stopped in San Antonio, and met his wife, Elizabeth. Needless to say, he never made it to California. They were married November 17, 1960 and went on to have six children. Elizabeth passed away after 25 years of marriage in 1988. Larry re-married to Joyce on July 22, 1989, and helped to raise her granddaughter Cynthia as one of his own. After 29 years of marriage, Joyce passed away in 2019. Larry worked as an automotive mechanic, and operated his own business for over 40 years. He made his living servicing the city of San Antonio, and was known as “The A/C King”. In his free time, Larry was an avid outdoorsman. He was at his happiest when out hunting, fishing, or camping. He relished in his retirement years, taking time to read and study the bible. Larry was strong in his faith. Larry was loved by his family and meant a lot to many people. He will be greatly missed.