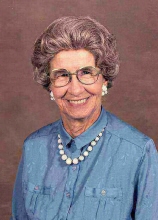 Lennie Helen Walston Ripley, passed into the arms of her Lord on Sunday evening, March 19, 2006. Born on December 15, 1915 in Chicago, Illinois to George Theodore and Ruby Oaks Seaman Walston, she lived briefly in Hamilton, Ontario, Canada during WW I, and moved to Columbus, Ohio as a young child. Raised by Christian parents, she spent her youth in the Methodist Church. During a high school graduation trip to Texas, she met Francis Ripley, a young man who worked as a fisherman's guide at the Moses Lake Fishing Camp of her grandfather, Frank Seaman. Francis followed her back to Ohio. They married in 1936 and shortly afterward joined Calvary Bible Church where Lennie began her involvement with Child Evangelism Fellowship (C.E.F.). This association of many years produced black and white illustrations to be colored, story boards, songs copied and learned, and lessons memorized and taught. Countless pages of colored construction paper were cut and shaped into 'Wordless Books'. She attended many C.E.F. Workshops, studied hard and became a 'teacher of teachers'. Lennie's teaching skills extended to Sunday School classes and numerous women's prayer groups at Bayshore Friends Church (1949-58), and in Texas City at Landmark Missionary Baptist (58-64), and Calvary Baptist, where she taught children's classes and then the Euzelian class (for women over 60) until her retirement in 1998. When the C.E.F. of Galveston County was formed, Lennie and her husband became members of the Board, and worked tirelessly with 5-day clubs, setting up the office, ordering supplies. Many buildings at the Good News Camp in Hitchcock were built by Ripley labor. Summers would find them both involved - Lennie as a teacher and Francis in the kitchen. (Uncle Rip's chili and gumbo were legendary with campers of the 70's - 80's!) Lennie's craft skills were utilized as she made 'Wordless Book' necklaces, bracelets, and pins. They retired from the CEF Board in the mid-90's after 30 years of service. Following the death of her father, Lennie and Francis provided a home for her mother, Ruby. They also cared for Ruby's sister, Grace - making repeated trips to Florida and then moving her into their home during her declining years and battle with Alzheimer's. Lennie's love and dedication to 'God, Home, and Country', and her membership in the Sam Houston and James McHenry Chapters of the Daughters of the American Revolution (through Job Rockwell, a 16 year old drummer boy from New York), resulted in several State DAR award-winning exhibits about The U.S. Constitution, The Statue of Liberty, and Christopher Columbus. She accompanied Francis to many coin shows and enjoyed the camaraderie of other dealers and their wives. She enjoyed watching quiz shows; often solving the 'Wheel' puzzles before contestants, and thought the first five questions on 'Millionaire' were much too easy! Following a July 2000 'Recognition Sunday' for the Ripley's at Calvary Baptist Church in Texas City, they sold their home and moved to San Antonio. Diagnosed with Alzheimer's, Lennie continued to read, enjoy TV, and attend activities at the Christian Services Center 'Grace Place'. In the fall of 2002, she and Francis joined Christ Presbyterian Church in San Antonio. Lennie and Francis moved into an assisted living unit at Merrill Gardens in 2003, and later to Woodbridge Estates. She was residing at the Texas Specialty Nursing and Rehabilitation Center, at the time of her death. Preceded in death by her husband of 68 years, and a brother, James A. Reynolds, Lennie is survived by a daughter and son-in-law, Lynnette Pearl Ripley and Virgil William Faulkner (San Antonio); a son and daughter-in-law, Francis Robert Ripley Jr. and Jon Michele Banic Ripley (Austin); three grandchildren, William Troy Faulkner and wife, Jacqueline (Wales, WI); Carolyn Frances Faulkner-Beitzel and husband, Mark (Drexel Hill, PA); and Dr. Lawrence Wayne Faulkner (Bartlett, TN); and three great grandchildren: Lillian Faulkner Beitzel, Andrew William and Catherine Jane Faulkner. A joint memorial service is being planned at the Good News Camp, Hitchcock, TX, with burial of their cremains at Fort Sam Houston National Memorial Cemetery. Memorials may be made to the CEF of Galveston County, 6205 Delany Rd, Hitchcock, TX 77563, or to the James McHenry Chapter, DAR, PO Box 690292, San Antonio, TX 78269.