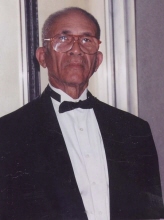 A Life's Journey Lonnie Sinclair Smith, Jr. was born April 17, 1924 in Gonzales, Texas to Lonnie Smith, Sr. and Gertrude Jones Smith. He was the fourth of sixth children. He was eternalized December 7th, 2005 in Dallas, Texas. Lonnie graduated from Gonzales High School and later attended St. Philip's College in San Antonio, Texas. He served in the Navy for several years and then re-located to San Antonio. After leaving the Navy, Lonnie met his soul-mate, Geneva Hasty Smith, and they became one, on June 30, 1952. They later became the proud parents of six children, Shirley, Lonnie Jean, Dale, Michael, Timothy and Monette. Lonnie studied the Bible, was baptized as one of Jehovah's Witnesses on December 23, 1962 and then dedicated his life to serving Jehovah God. Lonnie retired from the Tower of the Americas in 1991 as the Executive Chef. He served as an elder in several congregations in Texas for 35 years. Lonnie also lived in Eagle Lake, Texas; he was a devoted pioneer for ten years and he touched the lives of many witnesses and residents, in particular, the Noels. He was a great orator and two of his favorite scriptures were Psalms 83:18, 'That people may know that you whose name is Jehovah, you alone are the most high over all the earth' and Joshua 24:15, Now if it is bad in your eyes to serve Jehovah, choose for yourself today whom you will serve, whether the gods that your forefather who were on the river served, or the god of the Amorites in whose land you are dwelling, but, as for me and my house, we shall serve Jehovah. Lonnie was a devoted husband and father. He was an AWESOME cook who would always make each of us think we were eating an extravagant entree prepared for Kings and Queens. Lonnie's wife, Geneva, father, Lonnie Smith, Sr., mother, Gertrude Jones Smith, brothers, L.G. Jones and C.D. Jones, sisters, Willie B. McNary, Penelope Bradford and Irene Jones all preceded him in death. Lonnie is survived by his six children, Shirley Mae, Lonnie Jean,(Broderick), Dale Eugene,(Janet), Michael Dean, Timothy Roy,(Brenda) and Monette Lena Smith,(Donnell), five grandchildren, Bridget Evette,(Shelton), Kendra DeShun, Lonnae Kimberlon,(Larry), Lonneva Synclair, Timothy, Jr., one great-grandchild, Shelby Blake, sister and brother-in-laws, Rosie Lee and Howard Hasty, Olester McNary, B.J. Bradford, nieces and nephews, Carol, Linda, Theresa, Shantell, Vershawn, Brandi, Annette, Geraldine, Melford, Angie, Leo,(Iris), Craig,(Doris), Wayne, Terrell, Jayson, Richard, Lawrence, Donnie, Craig, Jr., Tray, Tyron, Charles, Johnny, many cousins, the Cook and Hamilton families, other relatives and extraordinary cohesive friends.