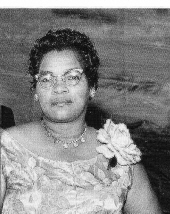 Luerean Hill was born on November 23, 1926 to Alice Sanders Rankins and B.C. Rankins in Evergreen, Alabama. She was educated in Evergreen, Alabama and in 1967 moved to San Antonio, Texas. She is preceded in death by her parents, one sister and four brothers. Luerean loved God and was very compassionate. She was a friend to everyone and was willing to help anyone she could. She worked as a nurse's aide at St. Benedict's Hospital and later worked at Normandy Terrace Nursing Home until her health began to fail. Luerean will be remembered as a devoted wife and mother. Her memory is cherished by her husband, Bobbie Lee Hill; her children, Eddie Hill, Barbara Hill-Dillard, Jerome Hill, Ivanetta Hartfield-Moundounga, Larry Hill, Maurice Hill, Jr. and his wife, Aretha; 10 grandchildren; 6 great-grandchildren; brother, Mr. and Mrs. March Rankins, Sr., Mr. and Mrs. Leon Rankins, Sr., Mr. Burt Rankins, and Mr. and Mrs. Roosevelt Rankins. Luerean will be greatly missed by a host of nieces, nephews, cousins, and friends. Visitation will be held from 5:00 PM to 7:00 PM on Monday, April 16, 2007 at the Meadowlawn Tribute Center. Funeral services will follow at 11:00 AM on Tuesday, April 17, 2007 at Dellcrest Church of Christ with Minister Peter Martin, Jr. officiating. Burial will immediately follow at Fort Sam Houston National Cemetery.