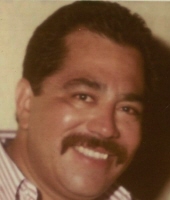 Luis Charles III, age 59, passed away peacefully on Sunday, 11 December 2016. He was born Thursday, 27 December 1956 in Del Rio, TX his parents are Luis Charles II and Julia Charles. He traveled all over the world while his father served on active duty in the US Army, and ultimately landed at John Jay in San Antonio, TX, where he graduated. He was a standout nose-tackle football player who would go on to serve in the US Army. After honorably serving his country, he attended college at Our Lady of the Lake University, where he would earn both his bachelors and masters degrees in social work. He dedicated his life to serving San Antonio's youth through social work, where he left a lifelong impact on so many. He was blessed with a strong musical gift that he loved to share in the form of playing guitar. He liked to play rock n roll, blues, you name it. Luis could man the BBQ pit like no other, as well. Those who tasted his homemade BBQ sauce can never forget it. His smile was infectious, and his laughter could fill a room. His sense of humor was unmatched and could make even the darkest days brighten for others. Knowing him, this would be the time he would insert one of his millions of jokes he had on standby for such an occasion. He is survived by his beloved wife of 25 years, Sandra Charles, and his children Amanda, Nicholas Charles and step daughter Alisha Longoria Barrera. Luis also left behind five beautiful sisters; Sally, Corina, Cindy, Kathy, and JJ. Luis had numerous grandchildren, friends and relatives. He is preceded in death by his grandparents Tomasa and Luis, and son Luis Charles IV, who are now resting in the peaceful arms of our Lord and Savior Jesus Christ. Services will be at ST ANTHONY MARY CLARET CATHOLIC CHURCH, 6150 Roft Road, San Antonio, TX, 78523, on Friday 16 December 2016, for the viewing and service from 10:00AM 11:00AM, followed immediately by the burial ceremony at Cordi-Marian, which is located at 11624 Culebra, San Antonio, Texas 78253.