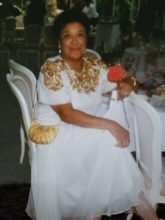 Marie Barnes Anthony was born in Edna, Texas on July 12, 1940 to her parents America and Louis Barnes. She was the second oldest of four siblings. Marie grew up in Edna as a Daddys Girl. She went to George Washington Carver High School where she was an A-student and enjoyed playing basketball. The family relocated to San Antonio and Marie graduated from St. Peters Claver High School in 1958. Around 19060 Marie met and married Cleotis Anthony, an Airman in the United States Air Force. While married, Marie had the opportunity to travel to various places to include Nevada, Colorado, Hawaii, and Japan. She returned to San Antonio around 1968 where she resided for the remainder of her life. Around 1991, Marie began attending church with her Sister-Friend Bernice Steen at Dellcrest Church of Christ. Shortly afterwards, she accepted Christ as her personal Lord and Savior and became a member of the church. She attended church faithfully until her health reached a point that she was no longer able to do so. At that point, the church came to her through the love and ministry of Bro. and Sis. Clack and others. This allowed Marie to remain a faithful member until her transition to be with the Lord. Marie worked as a cashier/sales lady and stocker. She was one of the first black employees to work on the floor at Woolco Department Store. She also spent years working as a CNA/caregiver. Marie loved music, dancing, and cooking. Anyone that ate her food knew to expect the spicy. She was a fashionista -always in step with the current trend and never too bashful to rock the latest or most daring hair-do. When asked, Maries family members describe her as: Loving. Compassionate. Beautiful, --inside and out. Fighter. Tough. Stubborn. Sassy. Non-verbally expressive. Fun-loving. Inspirational. Marie was preceded in death by her parents, her brother Willie Barnes, and her sister Audrey Edwards. She leaves the following to cherish her memory: Her children: Victor Ramone Barnes (Connie) and Angela Anthony Ross. One granddaughter: Tammy Marie Anthony, 5 grandsons: Shaun Anthony Ross, Jodie Collins III (Ana), Victor R. Barnes II, Caleb Xavier Barnes, Simeon Elijah Barnes. 11 great-grandchildren: Quentin Ross Fowler, Jasmine Ross Fowler, Jalia Fowler, Jajanay Fowler, JaCori Fowler, Robert Ross III, Tydria Ross, Destinee Collins, Nathan Rudd, Jodie Collins IV, Ariel Collins. 2 great-great grandchildren: Tymya Ross and Messiah Brown. Her brother: Charles A. Edwards (Ruth) and a host of other family members and friends.