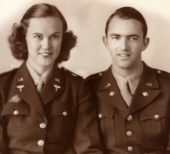 Marie Elvert Muir passed away at the age of 83 after a full and productive life and blessings beyond measure. She was the daughter of Hannah and Gunnar Elvert whose forbears emigrated from Sweden after the 1870’s, settling in Sycamore, Illinois, west of Chicago. She was born October 31, 1921, and spent her formative years on dairy farms with her parents and two brothers, all now deceased. She graduated from high school in 1940 and entered training at West Suburban Hospital School of Nursing, Oak Park, Illinois and graduated in 1944. Shortly afterward she entered the Army Nurse Corps as a Lieutenant, serving at Fort McCoy, WI and Ft. Jackson, SC. Lt. Marie Elvert and Lt. James Muir met while on orders to the Pacific. They were married in New Orleans on August 31, 1945, and after separation from the service, came to San Antonio. Marie’s nursing career of over 30 years was largely spent at the Nix Hospital, Morningside Manor, and Northeast Baptist Hospital. She was actively involved in various community organizations: American Red Cross Volunteers, Girls Scouts, garden clubs and as a lifelong member of the Evangelical Lutheran Church, serving her Lord in many ways. Her retirement years were enriched by serving over eight years on the St. Luke’s Lutheran Hospital Board and St. Luke’s Health Ministries Board. She is survived by her husband; two daughters and sons-in-law, Jennifer and Chip Johnson of San Antonio and Nancy and Herb Powers of Katy; and four precious grandchildren, Tres and Gunnar Johnson and Leif and Kirsten Powers. Other survivors are sisters-in-law, Andrean Elvert and Lillian Elvert plus nieces and nephews, particularly Dr. Tom and Sharon Muir of Austin and cousins Doris and Wesley Wellander. Her brothers, Rev. Harold Elvert and Charles Elvert predeceased her in the 1980’s. At Marie’s request, cremation services were performed at MeadowLawn Crematory. In lieu of flowers the family requests memorials to Abiding Presence Lutheran Church. Peace be unto you. To leave a note for the family, go to www.meadowlawn.net and Select Obituaries.