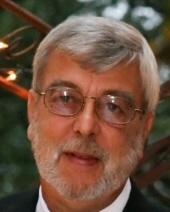 Mark Daniel Hazlett was born on June 17, 1948 in Natrona Heights, Pennsylvania. Mark passed away February 24, 2009 surrounded by his loving family and friends. He was preceded in death by his parents, Lyle and Lena Hazlett, with whom he is now reunited. Carrying on his legacy are his wife of 34 years, Cynthia Hazlett; his daughter, Melissa Ann Norton and her husband, Air Force Capt Matthew Norton; his son, Marine Cpl Clinton Hazlett; his sister, Carol DeAngelis and her husband, Gerald; his brother, Matthew Hazlett and his wife, Francine; and his youngest brother, Shawn Hazlett. A memorial service will be held at 1:00 PM on Saturday, February 28, 2009 at All Saints Anglican Church, 11122 Link, San Antonio. In lieu of flowers, the family would prefer donations be made in Mark's name to his former Boy Scout troop of which he was an Eagle Scout: BSA 186 c/o Mr. Evan Erickson, 302 Primrose Dr., Sarver, PA 16055-9575