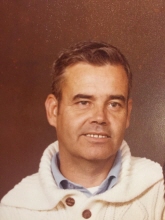 Marvin Lee Huggins passed away July 2, 2017 at the age of 73. He was born on July 27, 1943 in Bay City, Texas to Joseph and Frances Huggins. He was the second oldest of 12 children. He married Brigitte Hess on January 10, 1968 in Munich, Germany. They have been together for 49 wonderful and amazing years. He was a loving husband, father and grandfather (Opa). He retired from the US Army after 22 years at the rank of Staff Sergeant, during which he was in Radio communications early on and ended with helicopter repair as an instructor. Upon military retirement he became a very successful refrigeration repair technician with Sears. He was an avid fisherman, an excellent sausage maker and pit master, who enjoyed pleasing the taste buds of family and friends. He was a man that enjoyed being outdoors playing golf with his friends and children. Although he was a simple man, he loved all his gadgets. Growing up he was the oldest triplet of the trio, who were known as the 3 Musketeers (Marvin, Mary Ann and Melvin) all of who were inseparable. He rescued his loveable and daily companion Lucky (dog), when he mysteriously showed up at his doorstep one day. Moving on to his next chapter of life he leaves to celebrate this one his loving and devoted wife, Brigitte Huggins (Hess). His children, Richard Huggins, Diana Meier (Huggins), and Michael Huggins; grandchildren, Alexandria Huggins, Samantha Huggins, Robert Meier, Christopher Meier, Steven Meier, Mercedes Huggins, Alexis Huggins, and David Quesada; siblings, Georgie Gibbs, triplet sister Mary Ann Balling, Patricia Miska, Patrick Huggins, Veronica Wanjura, Monica Duncan, David Huggins and Mark Huggins; son-in-law, David Meier; Daughters-in-law, Joy Huggins and Nina Quesada-Huggins; and numerous other nieces, nephews, relatives and friends. He is preceded in death by parents, Joseph and Frances Huggins; triplet brother, Melvin Huggins, and brothers, Joseph Huggins, Jr. and Dominic Huggins.