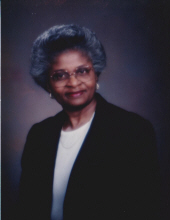 Mary H. Cooley was born December 5, 1937 in Center Union, Texas to Walter and Myrtle Davis. God called her home on Sunday, December 29, 2019. Mary attended the Center Union School system and graduated from Mary A. Brown High School in Smithville, TX. She attended St. Phillips College and received received her Bachelor of Arts in Education from Paul Quinn College in Waco, TX. In 1953, Mary participated and received a 2nd place medal in a State Spelling Competition at Prairie View. She also received recognition for spelling in the County and District for three years straight. In the tenth grade, she received an award for being the highest honor student of the class of 1955. Anyone who knew Mary, knew she was very family oriented, loved sports and baking for everyone. Her love for sports allowed her the opportunity to be a basketball, volleyball, cross country and soccer coach. Mary was an educator for over 30 years and taught at Riley Middle School and Lanier High School, where she was a Typing and English teacher. During her tenure, she was selected by a student as a Distinguished Educator in Who's Who Among America's Teachers in 1998 and was selected again in 2004-2005. Mary was a member of Emmanuel AME Church for almost 60 years, where she served as a Trustee, Class Leader, Choir Member, and Choir Secretary with Voices United and the Sisters in Christ. While under the leadership of Rev. Michael Gibson, she coordinated a Baby Contest for the church that raised ten thousand dollars. She also served as the Hospitality Guild President. On March 27, 1983 she was appointed a Steward. Mary was loved by many for her warm, welcoming spirit and of course her baking. Her baked goods, especially her infamous tea cakes would satisfy anyone's sweet tooth. Mary was always more than welcome to share in her joy of cooking and baking with anyone that asked. She lived a life of joy and happiness. She leaves to cherish her memories; her Daughter:Candace Woodard (Carvin); Son: Christopher Cooley; Grandchildren: Chelsea Coleman (Jermaine), Chantel Woodard, Chanel Cooley and Chloe Cooley; Great-Grandchildren: Jeremiah Coleman and Jericho Coleman; Sister: Elaine Asberry and a host of other relatives and friends. She meets at the gates of heaven: her mother and father, Walter and Myrtle Davis; Sister: Annie Ester Davis; Brothers: Arthow, James, Coy, Alvin, Julius, Donnie, and Robert Davis. “Jesus called the children to him and said let the little children come to me and do not hinder them, for the kingdom of God belongs to such as thee. Truly I tell you anyone who will not receive the kingdom of God like a little child will never enter it"