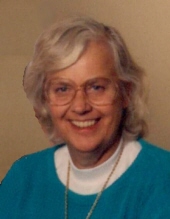 Mary Edna Terhar Wright entered life on December 20, 1926 in Cincinnati, Ohio and left on December 6, 2005 in San Antonio, Texas. Mrs. Wright is preceded in death by her husband, William. She is survived by her seven children; sons John, Kenneth, Andrew, and Jerome and daughters Nora, Elizabeth, and Amanda. She is also survived by her three grandchildren Jessica, Samantha, and Ian. Mrs. Wright worked for many years for the University of Dayton Research Institute and also attained her Bachelor of General Studies from the University. She so believed in the value of higher education that she attained hers by taking one class at a time during her lunch hours. For twenty-two years! She would have continued taking classes that interested her, but the University made her graduate. Mrs. Wright traveled extensively during her life taking trips to Germany, England, Switzerland, Italy, and the South Pacific. She also traveled widely in the United States, giving her children a love of travel. She also enjoyed reading, sewing, and quilting. The family would like to thank the staff of VITAS of San Antonio. We would like to express our heartfelt thanks especially to Victoria and Sherline for the wonderful care they provided to our Mom and for going above the call of duty on many occasions. You guys rock! To leave a note for the family , go to meadowlawn.net and select obituaries.