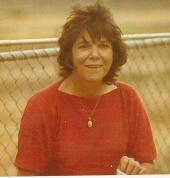 Mattie Ewell Hodgin was born July 23, 1936 in Loraine, Texas and died February 27, 2008 in San Antonio, Texas. Mattie was preceded in death by her beloved parents; Floyd and Pauline Griffin of Loraine, Texas and her older brother, Charles Lee Griffin of Roscoe, Texas. Mattie is survived by her loving daughter and best friend, Ewell Phariss and son-in-law Bob Phariss, both of Fredricksburg, Texas. She is also survived by her grandson, Thomas Phariss of Austin, Texas; as well as her sister, Dora Robinson of San Angelo, sister and brother-in-law, Frances and John Mayse of Poteet, Texas and various neices and nephews. Mattie loved dancing, country music, everything about Texas and above all else her family. Mattie faced life on her own terms, and left peacefully and easily when her time came. There will be a private family memorial service in Loraine, Texas. At Mattie's request the family asks that in lieu of flowers a suitable donation be made to the American Cancer Society, or a charity of your choice.