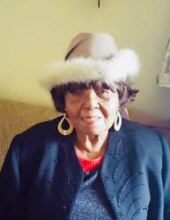 Maureen was born on May 4th, 1916 in Houston, Texas to parents, Edward and Amelia Ann Whitfield. She attended St. Phillips boarding school in San Antonio and later went to St. Peter Claver Academy where she finished high school. She attended Southern University in Baton Rouge, Louisiana and later moved to New York to attend New York City College at 19 years old. Working in several Administrative and Retail positions, Maureen spent the majority of her adult years in New York, New York. She married and had one daughter, Julee Hodge; however she moved back to San Antonio when her mother became deathly ill. Maureen and daughter attended St. Joseph’s Catholic Church for many years; however, Holy Redeemer Church was where she thrived and grew spiritually as a Lector proclaiming the “Word of God” for 25 years. She was also a member of KPC (Knight of Peter Claver Ladies Auxiliary) For 50 years. Maureen attended Claude W. Black Senior Center for many years, but District 5 Senior Center was her second home. She was the oldest attendee there and was treated like a Queen. Ben Dominguez and Berta Franklin made sure of that! Ms. St. Julian believed in “Putting on the Ritz” with fashionable and stylish clothing and jewelry. This was her “Trademark”. But when she wasn’t “Putting on the Ritz” she was financially supporting charities for countries around the world fighting hunger and disease…as well, she supported young seminarians seeking the priesthood. She leaves behind to mourn her loss her only daughter, Julee Hodge and son-in-law John Hodge, two grandchildren, Tanya Bell and Eric Hodge and their spouses Jeffrey Bell and Sheena Hodge, nine great grandchildren, seven great great grandchildren. Maureen has gifted us with beautiful memories which will be greatly missed by her family and friends. Our family is extremely grateful for the love and prayers extended by the Holy Redeemer Family. *God saw you getting tired and a cure was not to be so he put his arms around you and whispered “Come to Me”!