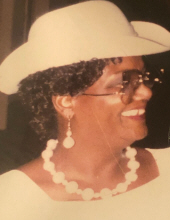 Sunrise - January 19, 1937 ~ Sunset - February 25, 2021 Mrs. Mercie (Rideau Marks) Mayberry was born January 19, 1937 to Thomas & Beatrice Rideau in Opelousas, Louisiana. She moved to Galveston, Texas, January of 1950. Mrs. Mayberry was a member of Jerusalem Baptist Church, where she served as Vice President of the Pastor’s aid, member of the Condolence Committee, member of Service Mission #2, and she was a 1956 graduate of Central High School. After high school she became a dietitian aide. She was last employed by the Shriner’s Burn Institute as a cook. She was also a charter member of the Galveston’s County President Club, past president of Be Gay’s Social & Charity Club, and former Den mother of the Boy Scouts of America. She is preceded in death by her mother (Beatrice Johnson) father (Thomas Rideau). Two sisters (Geraldine Gums and Mrs. Myrtle Mae Rideau) and brother, Robert Earl Guillory. She leaves to mourn one son (Anthony Earl Marks Sr.) and one daughter (Brenda Beatrice Harris). Both of San Antonio, TX. Two sisters (Mary Doucet-Opelousas, Louisiana) and Linda Jones-Houston, TX. Two brothers (Thomas Rideau-Pepsi, Cola, Florida) and Clarence Rideau-Houston, TX. Three grandchildren: Anthony Bailey-Houston, TX, Brynn Nicole Harris-San Antonio, TX, and Anthony E. Marks Jr-Houston, TX. A host of nephews (great nieces and nephews) and a special niece Barbara Rivers-Houston, TX. Tony and Brenda- I want you to know that you both have been the light of my life. I love you both very much. T.J., Brynn, Lil Tony, grandma loves you all so very much. Please make something out of your lives and know that you can be anything you want to be if you put God first in your life. I pray that you all have a long, healthy, and happy life. Love mama and grandma The service will be livestreamed. To access the service, please visit, www.meadowlawn.net and select her obituary.