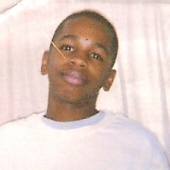 Michael Anthony Young, born on July 15, 1990 to Erica Pierce and Michael Young. Michael enjoyed weightlifting at the Barbara Jordan Center. He liked to spend time with his friends at the park playing basketball and football. He loved all kinds of cars and listened to Hip Hop music. He liked to joke around with his friends both boys and girls. Michael is loved by his family and friends. He will be dearly missed by all who knew him. Michael had great determination because even though he did not finish his formal education he continued studying and earned his GED. Recently he started studying to get his drivers license. He is preceded in death by his paternal grandmother Ella Young. Michael's memory will be cherished by his parents, Erica Pierce and Michael Young; two brothers, Frank Phillips and Eric Pierce; two sisters, Tasha and Sasha Pierce;step-sister, Brittany and Ebony Barnes, Grandmother, Ora Pierce; Godparents, Domingo Limon and Ben Wright; best friends the Morgan and McCracken Girls, numerous aunts, nieces, nephews and friends.