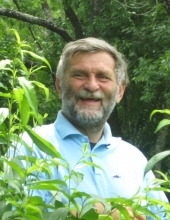 Michael David Stygar passed away Wednesday, May 27, 2020 at the age of 73 joining his Lord and Savior. He was born and raised in Norwich, Connecticut with his three siblings; Paul, Marcia and David Stygar. He attended University in Boston and Washington D.C., following his education he worked out West where he developed an appreciation for the outdoors which he passed along to his children. As his professional career progressed he took great pride in becoming a skilled construction manager adept with leading various teams of experts on a variety of construction projects which he was very proud of. April 26, 1980, Michael married Kathleen (Maslanka) Stygar after meeting each other at Pope John Paul’s speech in Washington D.C. Together they raised four children, three dogs, and two bunnies. At home Michael was dedicated to hard work and family life, becoming a father and instilling strong character values. He enjoyed listening daily to his son’s bible readings, the rosary, Neil Diamond, the Righteous Brothers, and being forced to attend events such as the New Mexico balloon festival which he later thoroughly enjoyed. In both his professional and home life he enjoyed building things that would last which included building by hand a three-hundred-foot stone wall with his family at his New England home. He is preceded in death by his parents and sister. Mike will be dearly missed by his loving wife, Kathleen Stygar, his two sons, Seth and Shem Stygar, and two daughters Krysta and Dany Stygar and granddaughter Zoey Talbert.