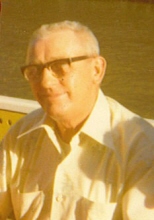 Paul J. Eck, CW02, U.S. Army Retired, was born on September 23, 1918 in Williamsport, PA and died March 19, 2005. Paul Eck joined the Army in 1937 and retired in 1957. After his military retirement, he owned and operated a succession of successful service stations. A loving husband and wonderful father, he was his wife’s primary caregiver for 20 years as she struggled with Parkinson’s disease until her passing on March 20, 2002. Paul was a man of quiet and determined devotion to his country, his family, and most of all to his beloved wife. He will be greatly missed by all who loved him. Paul Eck is survived by sons Paul R. Eck and wife Donna of Winters, Texas, and Michael Eck of Austin, grandsons Paul Donald Eck and wife Linda of Dale, Texas, Daniel Eck of Lewisville, and four great grandchildren. The family would like to express sincere gratitude for the special care given to Paul by neighbors Maryanne and John Menefee. Services for Paul will be private.