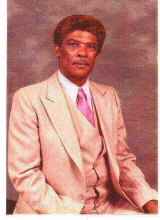 Percy Thomas Carroll was born on March 26, 1922 in Brazoria, Texas and entered into rest on December 27, 2008 at 12:10 A.M. He entered into the United States Army, 7 November 1942 thru 30 December 1945, where he served with distinction. While serving, he was awarded the Bronze Star Medal, Philippine Liberation Ribbon, Good Conduct Medal and a host of other service accolades. His overseas service includes Bismarck Archipelago, New Guinea and Luzon. After his military service, he moved to San Antonio, Texas and was employed with Union Pacific Railroad for many years. He met and married Verna Mitchell and to their union, they were blessed with two children; Percy T. Carroll, II and Darlene Frances Carroll. Later years he moved to his hometown of Brazoria. When his health stared to slowly decline, he moved back to San Antonio to be near his children. He knew no stranger; everyone he met became his friend. He loved his family, his friends and life very much. He was also an avid domino player, up until the end. He only wanted to play dominos with an experienced player and he always knew what was in every player's hand. Even though he suffered from Alzheimer's, he could still beat the pants (or skirt) off you. He accepted Jesus Christ, his lord and savior. He knew that Jesus was his path way to eternal life in heaven. He was preceded in death by his parents, two brothers, three sisters, son, Percy T. Carroll, II and Verna M. Carroll. His is survived by his daughter, Darlene C. Massie (Terry); sister, Bernice Williams; daughter-in-law, Jacquelyn Carroll; nieces, Ruth White (Charles) and Andrea Kibbe; nephew, Thomas Williams (Donna); grandchildren, Officer Percy T. Carroll, III, Air Force Capt. Zakiya Norris (Juan) and Dominique Carroll; great-grandchildren, Alexandria, Mireya and Tyler Carroll and Ashton Norris; also a host of great-nieces, great-nephews, relatives and Bill Schuler, his roommate and good friend.