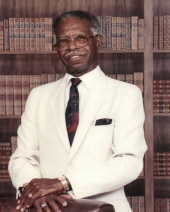 Ralph Alexander Williamson, Sr. was born July 13, 1931 in Lake City, Florida to George H Williamson, Sr. and Vera Lee Alexander. Both Parents; brothers, Frederick, Abraham and George Williamson, Jr., and sister, Mary W. McNeail preceded him in death. Ralph graduated from Richardson High School in Lake City, Florida on May 24, 1949, and enlisted in the U.S. Air Force on June 10, 1949, where he served honorably for 22 years and 5 months. He was trained as a Military Policeman and served as Air Police; Security Police for B-52, F-100, F-101 and F-102 Aircrafts; Training Instructor for Basic Airman; and Supervisor of Operations. His wartime service during the Vietnam War included the TET Offense of 1968 where he provided security, for a Radar and Radio site assigned to Headquarters 3rd, Marine Division at Hue, Phu-BAI, Republic of Vietnam. This base was hit by Vietcong mortar and rocket fire on January 30-31, 1968. After his retirement from the Air Force, Ralph served briefly as a JROTC Instructor at Holy Cross High School and a Park Ranger for the City of San Antonio. He relocated to Euless Texas and began employment with American Airlines. Following his retirement from American, Ralph was actively involved with the Euless Community. He was a member of First Baptist Church of Euless; Fort Worth Chapter #330 of the Vietnam Veterans of America; U.M.W. Scottish Rites of Texas, New Deal Lodge #182; Life Member of The American Legion, Post 379; and The Veterans of Foreign Wars, Post 4695. On December 26, 2016, Ralph made a peaceful transition from this life. He is survived by two daughters, Harriett and Sonja Williamson; two sons, Ralph II and Darold Williamson, Sr.; three sisters, Lillie P.W. (Edward) Stephens, Voncile W. Dawkins; Betty J.W. Jerry; 4 grandchildren; 11 great grand children; a host of nieces and nephews, cousins and friends.