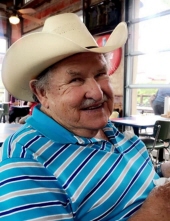 Ray Coel Palmer went to be with the Lord November 12, 2020. He was born January 1, 1937 to Thomas and Lucy Palmer in Demorest, Georgia. Ray joined the United States Air Force and was active from 1957 to 1961. After his service, he went on to work for Austin Powder Co. hauling dynamite all over Texas and Louisiana. Later, Ray ran a small business painting houses for a number of years until his retirement. In his off times, Ray loved to fish and spend time outdoors. He was a God loving man who had many friends due to his loveable personality, you would often see him with a smile on his face, making jokes or dancing to and singing along to his old records. His greatest joy had to be spending time with his grandchildren. He will be dearly missed by his family and friends. Ray is preceded in death by his son, Douglas Palmer; parents, Thomas and Lucy; and nine siblings. Left to cherish his memory is his beloved wife of 50 years, Karen Palmer; children, Kelly (Robert) Weyel, Darrell Palmer, Daphne Flores, Debra Morones and Daylon Palmer; stepson, Greg (Joy) Dillon; numerous grandchildren and great-grandchildren; siblings, Danny Palmer, David Palmer, Coleman Palmer, Rudolph Palmer and Evelyn Fuller.