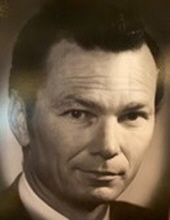 Rees Walker entered life on January 14, 1932 in Hugo, Oklahoma. He passed away peacefully at the age of 87 on October 8, 2019. Rees grew up loving sports and brought a competitive edge to everything he did. He joined the US Air Force after graduating college and served his country with deep pride. During these years, Rees married and had two children, Marie and John. In 1964, Rees left the military to join IBM in San Antonio, where he was frequently a top national salesman throughout his 30-year career. In time, Rees won the heart of his true love, Isabel, with whom he lived happily for the rest of his life. As he grew older, so did his faith and commitment to the Catholic Church. He was a member and active in the organizations in the parishes of St. Francis of Assisi, St. Joseph Honey Creek and Holy Trinity. Through the church, Rees commenced a journey of personal growth, and it was his growth as a man and a Christian that were his proudest accomplishments. With his passing, Rees joins his parents, Raymond and Golden Walker of Sherman, Texas. He is survived by his loving wife, Isabel Walker; his dear sister, Mary Seay; his favorite golf partner and greatest champion, his son, John Walker and wife, Jennifer Walker; his beloved daughter, Marie Walker and husband, Chris Williams; much loved grandchildren, John Eric, Lara, Kevin, Aria, Bradley, and Landa; great-grandchildren, Dylan and Natalie.